Is Toe Spring in Footwear Really Related to Injury?

A recent study by Professor Daniel Lieberman and colleagues is nothing short of misleading and confusing.

Professor Daniel Lieberman has a track record of publishing information that at best could be called misleading, or at worst, scientific misconduct, an accusation levelled by Dr Steve Robbins here.

Nature Magazine seems to be supportive of this behaviour, and has, in my view, lost considerable credibility by publishing articles that continue to support unsustainable conclusions.

Both Lieberman and Nature are at it again with a recent article titled:

It is open access and may be read in its entirety here.

It tests the general hypothesis that shoes with a toe spring will affect stiffness of the foot-shoe-complex and the total work done at the MTP joints.

Hypothesis 1 is that during midstance, the stiffness of the medial longitudinal arch will increase with greater toe spring angles since the dorsiflexed position of the toes activates the windlass mechanism.

A fair bit has already been written and spoken about this article, so I shall limit my input to correcting some of the misleading information in the article, and leave you all to draw your own conclusions.

It does not take long for the inaccuracies to begin.. in fact, they begin right at the very start of the article!

“Although most features of modern footwear have been intensively studied, there has been almost no research on the effects of toe springs. This nearly ubiquitous upward curvature of the sole at the front of the shoe elevates the toe box dorsally above the ground and thereby holds the toes in a constantly dorsiflexed position.”

Lieberman and co then justify this statement with this graphic.

This is an outrageous exaggeration of what we see in a modern running shoe and is drawn in such a manner as to grossly exaggerate the facts and underpin the first of the author’s many erroneous claims. It also sets the tone for the entire experiment, which, on the basis of this single misrepresentation should be immediately brought into question.

In fact what this drawing represents is a shoe with close to a “zero drop”, a style of shoe Lieberman himself champions.

The black lines show the midsole thickness has no gradient, as is evident in nearly every commercially available running shoe on the market.

There is little or no differential in the gradient or ‘drop’ between the midsole of the heel and the midsole of the forefoot. The graphic represents no commercially available running shoe I am aware of, and is designed only to over exaggerate what ‘might’ happen to the toes if such a shoe did exist.

Below is what a real running shoe toe spring looks like – check the strobel board line for reference, in these Hoka shoes in the top photo, it’s almost flat and the bottom photo of the Nike is what I would refer to as subtle. 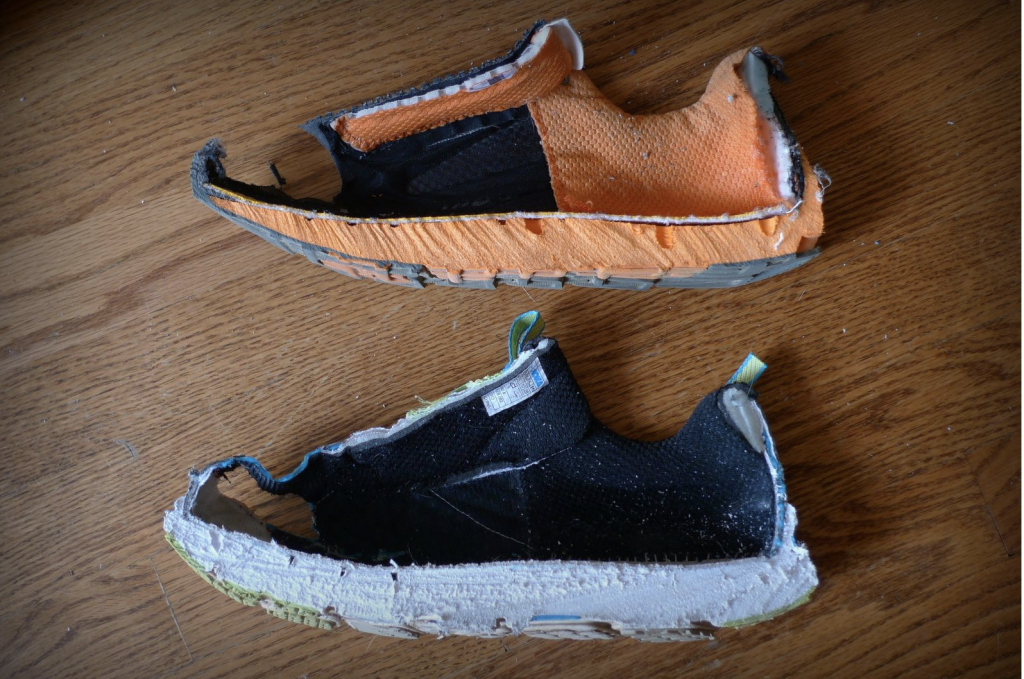 The toe spring demonstrated in graphic 1 above (in what is supposed to be a scientifically rigorous paper) is at least 40 degrees, whereas the industry standard for running shoes is 15 degrees or less! Therefore the statement in this paper that the normal toes spring of a running shoe “holds the toes in a constantly dorsiflexed position” is incorrect and misleading. At the very worst, the toes might be held in a very small degree of dorsiflexion, but certainly less than 10 degrees and nothing like the gratuitous graphic above!

OK.. so what did they actually do?

Participants walked on the treadmill barefoot and in four pairs of custom-made sandals with varying degrees of toe spring angle. The sandals consisted of a top sole, rubber outsole, foam midsole (thickness 2 mm), and curved fiberglass plate that ran the length of the sandal and curved upwards at the ball of the foot to the tip of the sandal. The upwards curvature under the toes was either 10°, 20°, 30° or 40°. 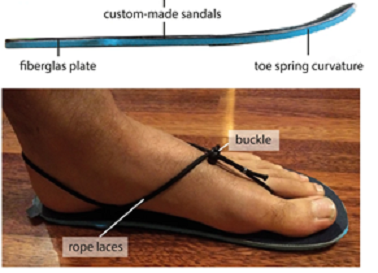 Now this is what happens when an evolutionary biologist starts to talk about athletic footwear.. first, you must know the processes. And, what is a huge and glaring error here is that toe spring is never.. not ever discussed in terms of degrees at a manufacturing level. It is always discussed in terms of millimetres, and this does NOT translate to degrees.

So, right away we have a fundamental error.

The authors then state that:

Now this again is very misleading and I am uncertain if the authors have the necessary knowledge of the shoe manufacturing process. Specifically

“toe spring is NOT built into the shoe, it is built into, and solely determined by, the last”.

This is a very important point, because if the spring is built into the shoe, it will of course dorsiflex the toes by the amount of spring present. HOWEVER, if it is build into the last (remembering it will be 15 mm  tops), the toe spring is countermanded by other factors including the drop of the shoe and thickness of the insole (sockliner).

Because of this, the position of the digits in most commercially available running shoes is likely to be very close to neutral!

I also feel a major oversight of this study is that the experimental conditions were barefoot and the four sandals, but traditional running shoes were excluded.

How then is it possible to amortise the results back to toe spring in running shoes?

What did the study find?

Then, things really start to unravel, as the authors attempt to connect toe spring with injury, specifically plantar fasciitis (which was NOT any part of the study).

Well fair enough, but the 10 degree sandal, which closest approximates a running shoe, demonstrated an INCREASE in negative work, the same as the barefoot condition!

“Thus, habitually wearing shoes with toe springs could inhibit or de-condition the force generating capacity of intrinsic foot muscles. While the direct consequences of weak foot muscles are not fully known, it is likely that they could increase susceptibility to flat foot and associated problems such as plantar fasciitis”

I can only make the following observations

I try to see the positives in every study I read, and I always try to learn. With this one though I just have an overwhelming sense of confirmation bias and an agenda to paint modern running footwear as something it is not. Does it really matter?

Well the final comment should go to the banner headline in the UK Guardian newspaper: 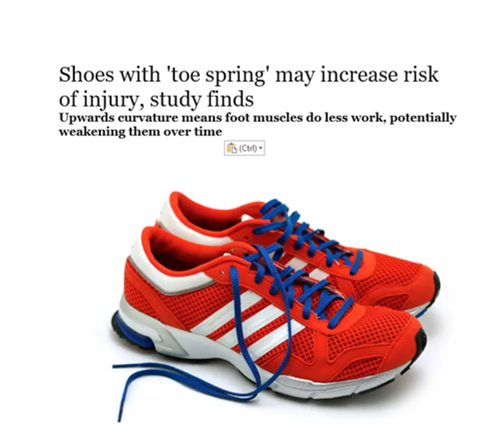 And because lots of people read this stuff, it is important we get it right so we would encourage you all to pass this article onto those who may be interested in such topics.

NSAID use in College Athletes: Houston we have a problem

Pronation vs Foot Movement – What is Important?

Plantar Heel Pain. If It Is NOT the Fascia, What Else Might It Be?

Should we treat plantar heel pain and Achilles tendinopathy simultaneously?