Plates, stacks, cushioning and BLING. NOT the reason the Nike Vaporfly and alphaFLY are the fastest shoes ever made!

We are on Nike overload, especially in the wake of Eluid Kipchoge’s massive run in Vienna to go sub 2 hours for the marathon distance.

And in the glow of all this, hundreds of punters have discussed the shoes he wore, the so-called alphaFLY, as well as the shoe of choice for nearly every elite marathon runner, the Nike Vaporfly 4%/NEXT%.

These shoes have now been endowed with magical and mystical powers, with hushed discussion of “springs” and “levers”, and foams brewed up in the very bowels of hell, available only to those who have sold their souls to the devil!

The IAAF, the governing body of athletics who set the rules, has even jumped into the mire, with promises to review these shoes to check if they infringe rule 143.2, which clearly states:

Now, we have to be clear here, and state that anyone believing that ANY super elite marathon runner, man or woman, who is winning or is likely to win a marathon major is abiding by rule 143.2, is also likely to belive that Cholera is caused by foul miasmas.

Even the athletes are jumping on the bandwagon.

“It’s a bit of a distraction to our sport right now. It’s hard to really just celebrate performances at face value right now,” Sara Hall, an Asics-sponsored runner and Ryan Hall’s wife, told Outside Online. “So I think it would help to have some limits, just like other sports have, like swimming, or triathlon, or cycling. They all have limits of the gear. So I think that would help create more of an even playing field.”

Sorry to shatter illusions, but it has NEVER been a level playing field, because there is a mountain of money involved, AND, winning is at stake. It therefore is almost certain that these super elites are racing in bespoke shoes, fashioned specifically for them and in clear contravention of 143.2

In the case of Kipchoge, it is extremely unlikely that ANY commercial variant of the alphaFLY fairly representing what he wore will ever be available to the masses.

So, rule 143.2 is clearly pointlesss in this regard, but, in the context of this discussion,

I don’t care because I am fascinated by the technology.. the science.. the innovation.. the design brilliance that goes into these shoes.

The alphaFLY is already well obsolete. It for sure would have been created about 2 years ago, even before the Breaking 2 event at Monza, and I have absolutely no doubt Nike has something else way more radical and way faster in Phil Knight’s hot little hands..

But that is not what I want to talk about. I want to explore exactly what it is that makes these shoes so fast.

The five fastest marathon times ever recorded have all been achieved by male runners wearing Nike Vaporfly shoes.

As recently as last Sunday, another major, the New York City Marathon, was won by a Nike athlete, Kenya’s Geoffrey Kamworor, wearing a Nike Vaporfly NEXT%. 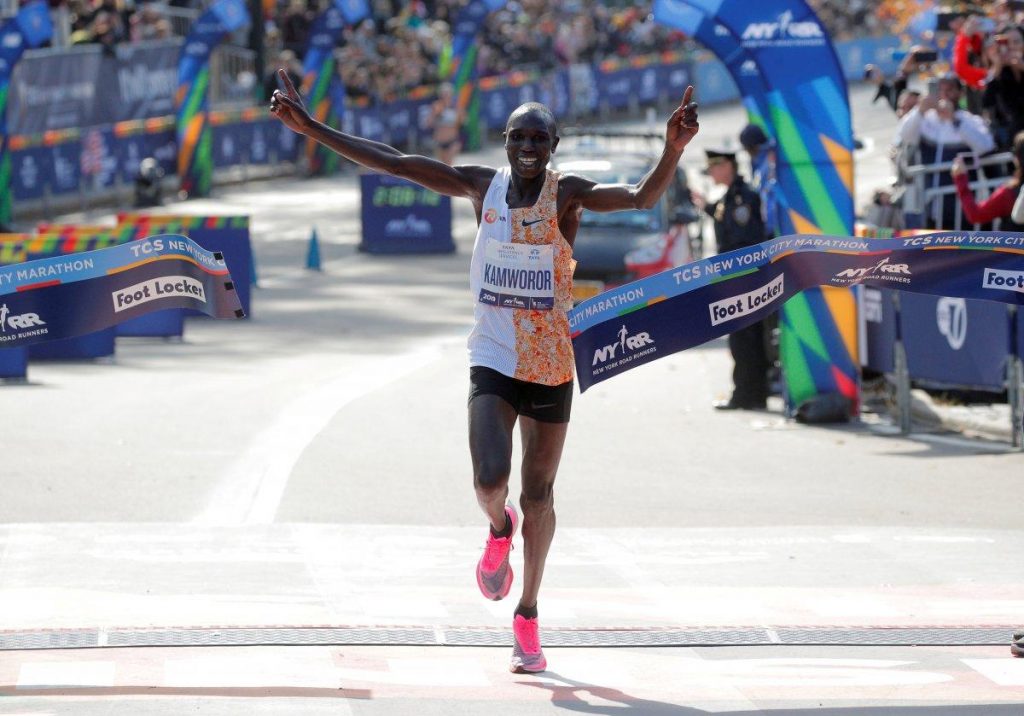 The day after Kipchoge ran 1:59:40 for the marathon distance, Kenya’s Brigid Kosgei did not beat the record for the fastest marathon (female), which has been held by Britain’s Paula Radcliffe for 16 years.

She smashed it, pulverised it, gave it a good old fashioned shelacking, taking nearly a minute and a half off the previous record (when for the last 30 years years World Records have generally been reduced by only a few seconds).. all in a pair of Nike Vaporfly NEXT%! 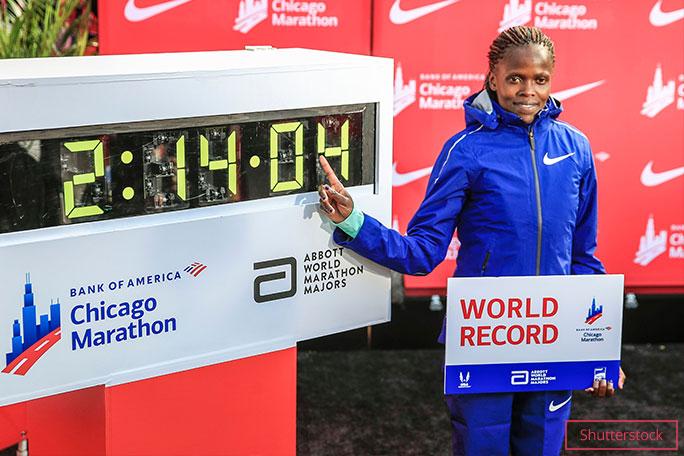 OK, so I think we can all agree these shoes are fast (taking absolutely nothing away from the athlete), and that there is now abundant evidence they do offer a performance advantage.

How do they do it?

In 2016, Nike unveiled the first version of the Vaporfly, appending “4%” to the name in reference to the energy savings they were purported to provide. The shoes represented the technological component of a three-year, multipronged effort to engineer a perfect marathon and break the 26.2-mile race’s elusive 2-hour barrier at a track in Monza, Italy.

This attempt failed by the slimmest of margins, but of course history was rewritten 18 months later in Vienna.

So, how do they work? Nike insider Wouter Hoogkamer, a biomechanist in the Locomotion Laboratory at the University of Colorado Boulder, says

“Our research suggests that the energy savings of the first Vaporfly came from two things, the foam in the midsole and the carbon fiber plate sandwiched inside,”

Well, yes, this seems reasonable, because these race shoes are so far removed from those used a few short years ago, as to be unrecognisable.

The Nike shoes have massive stacks, are very stiff, have double the drop (8mm), but are still very light.

The foam in the midsole is made from Polyether block amide or PEBA (but trademarked as PEBAX) and it is uncommonly compliant and resilient.

Those properties enable the foam to absorb the energy a runner applies on impact and return a portion of it to their stride … somehow. How it works, exactly, remains unclear. The researchers originally hypothesized that the foam would save runners energy by reducing knee flexion, but that turned out not to be the case.

“But the foam, mechanically speaking, is a big player in whatever’s going on,” Hoogkamer says.

So how about the plate?

If anything, it can only be a lever.

Hoogkamer’s findings suggest the plate’s lever function is negligible. What the plate does do is improve runners’ ankle mechanics by reducing the joint work thereby altering the load on the calves. At the same time, very recent research by Emily Farina (see below) has shown the plate improves negative work at the 1st MPJ, and, bafflingly, without INCREASING work at the ankle!

On the balance, it seems the foam does more than the carbon fibre plate. To the point where one of the chief external researchers of both the 4% and NEXT%, Rodger Kram, recently told me that of the 4% improvement (which now is in little doubt), 3% came from the foam, and just 1% from the plate.

But still we have NO explanation of the actual mechanism.

So,, to get clarity, we have to take a look at Eluid Kipchoge.. watch this short video

Now, I hope you are seeing what I am seeing.

The thing that stands out for me, is that as he crosses the finish line after this monumental achievement, this absolutely exhausting ordeal, he looks like he could do it all again.

Absolutely fresh as a daisy and no apparent signs of fatigue. and so.. this got me thinking..

We know the shoes have an energetic advantage, and we can clearly see this demonstrated by a lack of fatigue.

Might the effect not be due to “energy return”, but rather by fatigue reduction? And, if that were the case, could the shoes’ primary function be to attenuate input vibration, because vibration is mostly attenuated by muscle contraction, which increases fatigue?

This is what Benno Nigg has been talking about for years, and, I think, Nike may have cracked the muscle tuning paradox with the Vaporflys and alphaFLY.

This is what we know.

Vibration accounts for about 20%+ of ALL input load. It is likely that it is way more important than peak impact, impact loading rate, pressure and changes to joint movement.

Ask yourself the question, “how come cushioning does not seem to affect injury rates, when logically it should.. IF it reduces peak impact force and loading rate”

The answer, cushioning does not influence these loads. So something else must be at play, and that something is vibration.

Input vibration is a very important load. Experimentally, vibration has been shown to affect all tissue, and most importantly bone (stress fracture), blood vessels (angiopathy), tendon, muscle and nerve (neuropathy).

There is even a syndrome caused by exposure to vibration, for example road crews operating pneumatic drills, called Hand Arm Vibration Syndrome, which presents as severe Reynaud’s-like symptoms. 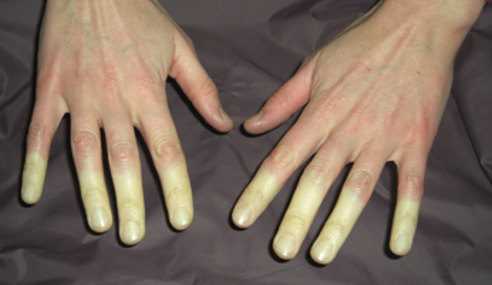 Vibration has both amplitude and frequency, and in running it is attenuated by 2 things

If left unchecked, the muscles must do all the work to prevent vibration from damaging tissue, especially below the knee, and so contribute to greater fatigue.

Vibration attenuation with the shoe is all about reducing the transmitted shock wave. So this is basically all aboout sound proofing.

Sound proofing is achieved via the construction of the sound proof wall and the geometry of the structure. It is designed to reduce the level of sound, transmitted as a vibration, to the little bones in the ear.

Here is the Nike alphaFLY  and Vaporfly NEXT% 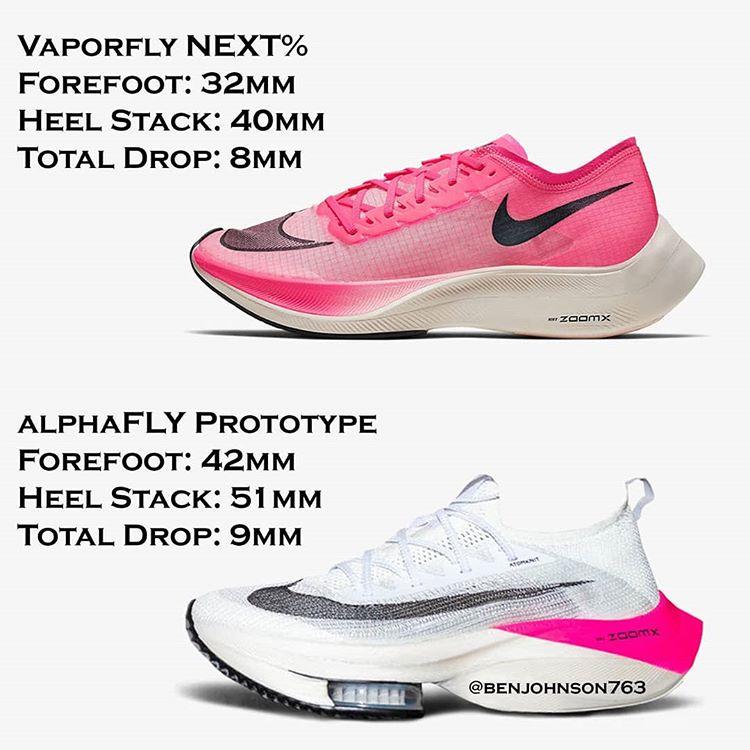 And this is how it is built..

This is vibration attenuation by construction 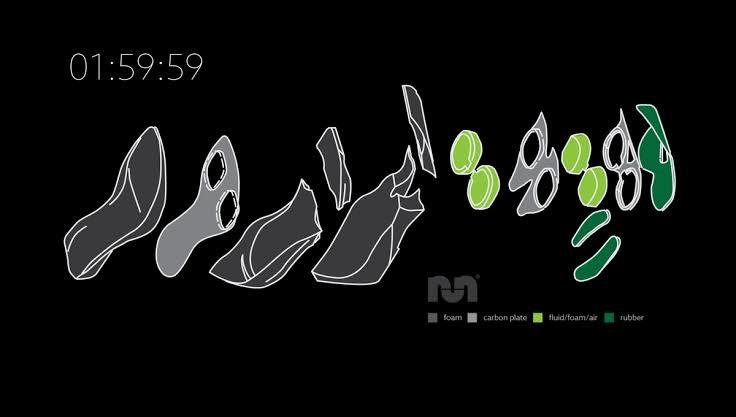 This is vibration atenuation by geometry 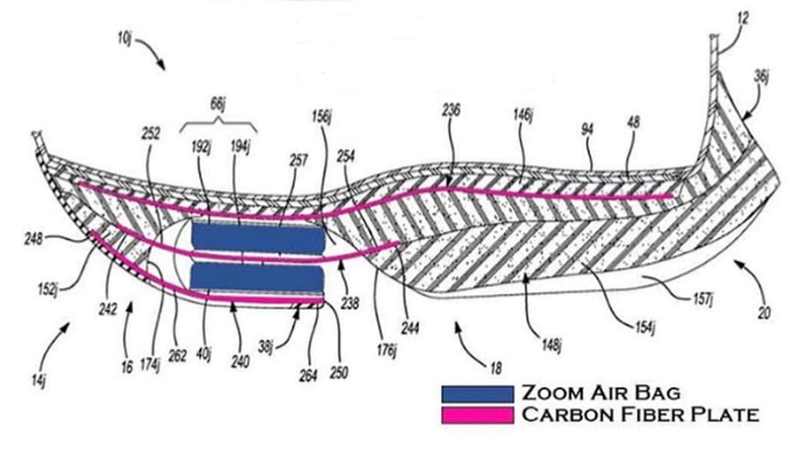 So, to wrap it up, if one can dampen input vibration, one can reduce muscle contraction and load and thereby reduce fatigue.

I believe these Nike shoes function in this exact manner by employing a unique sandwich construction (just like a soundproof wall) of 3 carbon fibre plates and a number of other “moving parts’.

In addition, they have modulated the geometry of the entire shoe, which helps to reflect input vibration, just like the geometric baffles employed in a sound studio.

As further evidence, a recent paper presented in July this year by Brett Kirby from the Nike Sports Research Lab revealed that

“the Nike Vaporfly 4% provides notable protective benefits with regards to attenuating muscle soreness, damage (as established by a reduction in blood inflammatory markers LDH IL-6 as well as WBC’s),and inflammation. Furthermore, such reduction in muscle burden by the VF4 is associated with functional benefit via a sustained augmentation of training load and performance”…

And the only way they could have done this is via a reduction in input vibration.

I believe this reduction could be a much as 4dB, which is ENORMOUS and would also fit in nicely with the Nike “4” moniker…I smell a conspiracy!!

We may never know..but I sure would like to get a bunch of athletes with the Nike shoes into the lab, strap on the accelerometers and measure the vibration!

Love to hear your comments and thoughts!

PRP In Sports Medicine: Is Science Becoming the Sham? BJSM Goes On The Attack!

EXCESSIVE PRONATION AND INJURY – WHAT YOU NEED TO KNOW

Is The Achilles Tendon Attached To The Plantar Fascia?

Does a Change to Training Cause Injury?

SHOEphoria Podcast with Trevor Prior