Super Shoes Are Not All The Same! Buyer Beware!

I have put together this infographic for you from a very recent paper just published. You can read the paper in its entirety here, but I thought it would be fun to summarise the study, its methods and outcomes graphically.

It is a relatively small, single-sex study, but boy are there some interesting results!

Basically, the study focused on the energetic properties, (i.e., did the shoes improve running economy) of 7 carbon plated “super shoes” and compared them to a traditional racing flat. The researchers also did something else very interesting, they looked at the percentage of the runners who responded to the shoe .. or not. 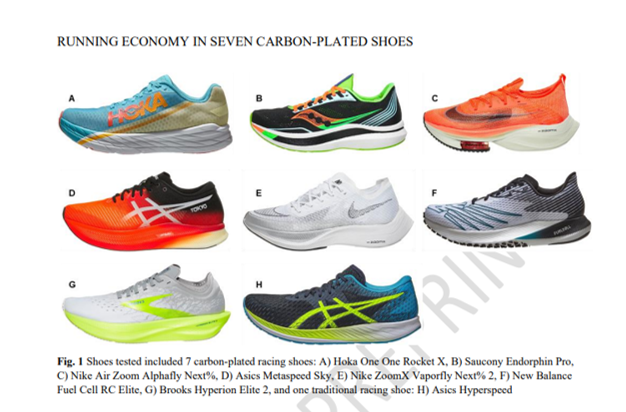 The 8 shoes included in the study including the “control” racing flate. Source

The upshot of the study is that Nike, with both of the shoes included in this study, the Alphafly Next % and the Vaporfly Next % 2, are a fair way ahead of the pack. In this study, the Brooks Hyperion Elite 2 and the Hoka Rocket X did not significantly reduce VO2 max, while both the Nikes reduced VO2 max by close to 3%, and the only other shoe able to better 2% energetic advantage was the ASICS Metaspeed Sky.

In terms of responders, the study looked at the percentage of subjects who responded with at least a 2% decrease in VO2 max compared to the racing flat. 83.2% of the runners responded to the The Nike Vaporfly Next%, 75% to the Nike Alphafly, with the numbers then dropping off fairly dramatically, with the ASICS Metaspeed Sky once more coming in third.

Of great note was that 0% of the runners responded to either the Hoka Rocket X or the Brooks Hyperion Elite 2. 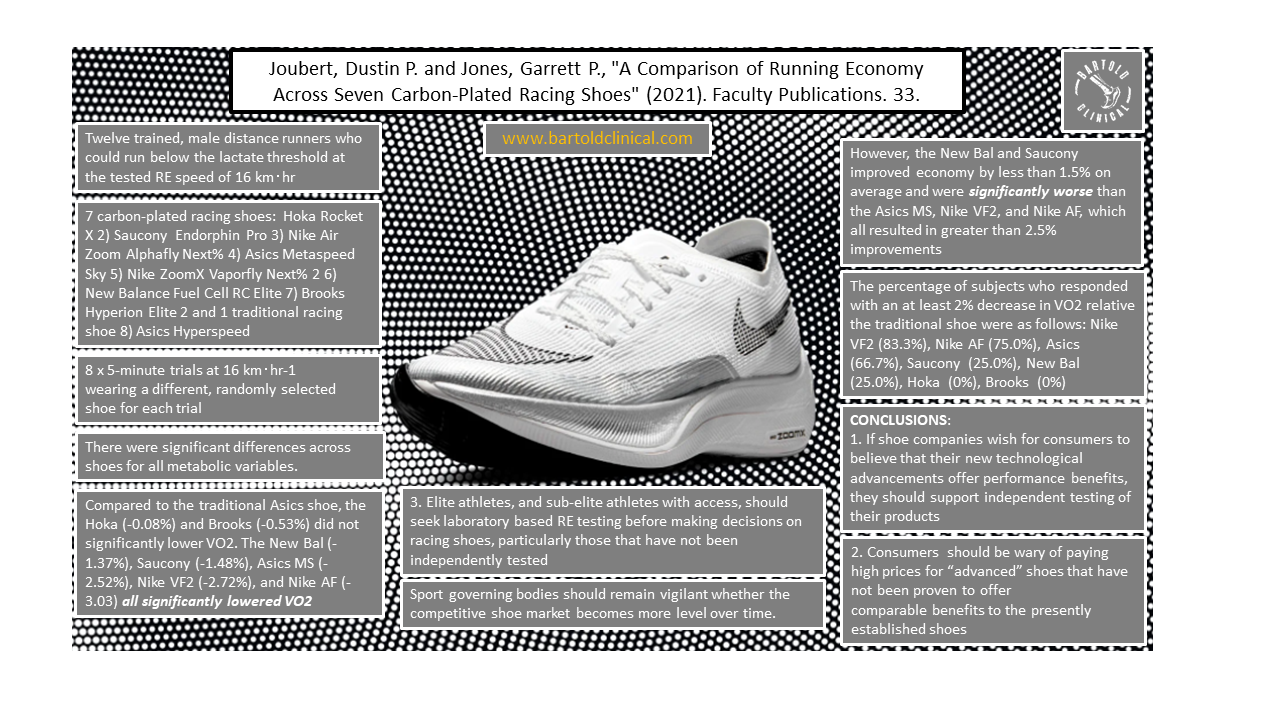 What this tells us is that just because the shoe has a carbon plate and high tech midsole, it does not necessarily mean the shoe will offer an energetic advantage. Furthermore, the percentage of people who respond to this technology fluctuates wildly from shoe to shoe, and for some shoes, that response is zero!

So the moral to the story is that clinicians need to be careful with their advice and recommendations, especially if you are dealing with elite/sub-elite runners, and the consumers need to be very careful and not swallow all the marketing shlock.

Finally what this tells me is that Nike will remain ahead of the pack for now, not the least because they are the only shoes that have been subjected to independent external research with very consistent results.

One caveat to this study is that it is published in an internal journal for the Stephen F. Austin State University. I am uncertain if this publication has an ISSB or if it is peer-reviewed. That said, there are no glaring flaws with the study.

As always your comments and thoughts are most welcome!

Treating First MPJ Osteoarthritis: Do We Know What We’re Doing?

Foot Orthotic Prescribing: Do we have it right?

EXCESSIVE PRONATION AND INJURY – WHAT YOU NEED TO KNOW