The biomechanics of running and running styles. A new paradigm.

You have read all the books right? And you are worried you might be a “rearfoot striker” when you know you should be a “forefoot striker”.. right? You might even have taken the “good form running” course.

One thing is for sure, if you want to remain injury-free, “good’ form is the answer… RIGHT?

Well, these sorts of thought processes have bothered us here at Bartold Clinical for quite some time. Why? Because the notion that there might somehow be a universal best way to run, given the vast variability of the human organism, is, frankly, ludicrous!

Couple that to what is now a huge body of scientific literature underlining the fact that there appears little, if any, benefit (especially from an injury perspective) to forefoot striking. Furthermore, for any runner who is not injured to change from a rearfoot strike pattern to a forefoot strike pattern is fraught with potential injury issues. 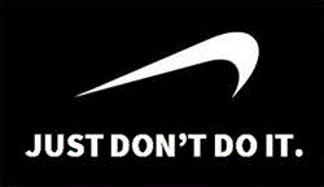 This morning, a paper came across our desk that might be one of the most controversial and important we have read in relation to running biomechanics in several years.

This paper is very unusual in that it is a knowledge synthesis, in other words, not a study, but a commentary on what we know about running biomechanics, running style and injury, to date. So, it is an opinion piece, albeit highly informed, and as such we need to keep this in mind, but boy.. it sure does make for interesting reading and puts forth a compelling case for a change to the existing “form” wisdom.

The paper is entitled

The biomechanics of running and running styles: a synthesis and may be read in its entirety here. It is 39 pages long, I believe the longest published paper I have ever seen, let alone read, but we HIGHLY recommend you take a look at it because it is epic at all levels!

The basic premise of the paper is

And, that is just the start of the introduction! It gets way better as it progresses…

The paper goes on to say

“the conclusions regarding different kinematic and kinetic parameters and running economy are often contradictory, and the literature on the relationship between running technique and injury risk suffers from considerable inconsistencies”

Unfortunately, the analysis, presentation and interpretation of isolated biomechanical parameters are also common in science,

The effectiveness of feedback or studies based on isolated parameters should therefore be reconsidered.

I could not agree more!

OK… so that just poured freezing cold water on several dearly held notions, but, we should ask, if you must do that… what do you have to offer? Well, quite a bit as it turns out!

First up, the authors do something absolutely unheard of… they actually make a real attempt at a definition of running style!

They then fully put themselves under the microscope by stating

“This synthetic review aims to identify the (minimal) set of parameters that lead to a concise, yet, comprehensive description of the full spectrum of running styles”

Holy Cow! This is like a politician actually outlining an action plan for meaningful change… unheard of!

OK, what did they come up with?

First up, they very clearly outline what they believe we should be looking at, namely “the interdependency between the parameters and their relationship with speed will be studied. Since the goal of locomotion is to transport the Body Centre of Mass (BCoM), we expect that fundamental differences between running styles will be apparent in the BCoM trajectory.”

“In running, most of the body’s movements occur in the sagittal plane. This is reflected by the relatively high force amplitudes in the vertical and the horizontal direction compared to the medio-lateral direction (Hamner & Delp, 2013; Nordin et al., 2017).

Likewise, energy expenditure in running is predominately determined by movements in the sagittal plane. Arellano and Kram (2014) have estimated that runners use 80% of the net metabolic cost for bodyweight support and forward propulsion, 7% for leg swing, and only 2% for sideward balance control, leaving 11% of the variance unexplained. Therefore, we believe it is safe to assume that differences in running styles will be apparent in the sagittal plane trajectory of the BCoM.

This makes a mockery of all the years we have wasted trying to “control” frontal plane motion in running.

It is not our goal to reproduce this mammoth paper here, and brevity is king, so let’s now cut to the chase.

In essence, the authors created a brand new model. what they call the

based on the premise that that different running styles are reflected by spatiotemporal parameters (step frequency, step length, timing of stance phase and flight phase, vertical displacement and vertical stiffness amongst others).

To this end, this review focuses on spatiotemporal parameters and their relationships with speed, ground reaction force and whole-body kinematics. Based on this evaluation, the authors submit that the full spectrum of running styles can be described by only two parameters,

namely the step frequency and the duty factor (the ratio of stance time and stride time) as assessed at a given speed.

Wow… beautifully simple in its complexity.

Now based on all this, the authors propose that a particular running style may be placed on a “dual-axis framework” to identify one of 5 defined running styles: 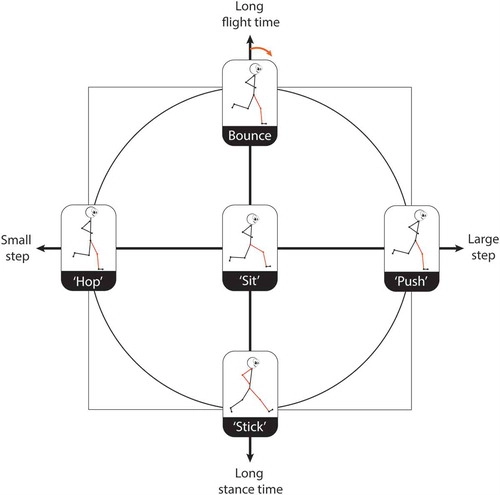 The horizontal axis is defined by Stride Frequency (SF) corrected by leg length and signifies the forward BCoM displacement per step. With at the left a high SF and at the right a low SF.

The vertical axis represents the ratio between the stance and flight phase, which is quantified by the Duty Factor (DF – the ratio of stance time and stride time). With at the top a running style having a low DF.

Together the axes describe a continuous spectrum of running styles within the extremes ‘Stick’, ‘Bounce’, ‘Hop’, and ‘Push’ styles. Based on the horizontal distance between initial contact and the hip, a running style labelled ‘Sit’ is positioned in the centre, which is characterised by a flexed knee at initial contact.

The curved orange arrow at the top indicates the expected effect of running speed on the interdependency between DF and SF.

This really is a novel approach to classifying running styles.

We would expect that the framework will help to describe the most fundamental differences in running styles since the BCoM movements depend mechanically on the GRF patterns and limb and trunk kinematics.

The categorisation of the five styles, coined ‘Stick’, ‘Bounce’, ‘Push’, ‘Hop’, and ‘Sit’, provides a practical overview to guide future measurement and interpretation of running biomechanics and can be used to study the effects of gait modification and to help the interpretation of study results. It may also give is important indicators to cracking one of the hardest nuts in sports medicine, understanding the link, if any, between running “form” and injury.

By identifying the key characteristics to differentiate running styles, this review and the synthesised Dual-axis framework seems intended to provide a unified concept for interpreting measurements, for conducting future research on performance, running economy and injury risk, as well as for designing and testing coaching interventions.

Please let us know your thoughts on this one.

The windlass Mechanism does not occur when wearing shoes..

Why Has Football Boot Design Not Changed In 40 Years?

The knee and lower limb injuries. Should we abandon functional testing?

The biomechanical effects of pronated foot‐function on gait