Understanding Running Footwear in the 21st Century: What Has Changed And What To Expect

The last 10 years have been one of the most tumultuous decades since the modern era of running footwear began in the early 70’s.

Trends like minimalism and maximalism have redefined how we think about running shoes and what they can do, and have certainly presented challenges for practitioners to sort the facts out from the hype.

Marry this to the last three years, and the advent of some of the most sophisticated new concepts and product in running footwear history, and it is little wonder we need some clarity.

For the last 40 years, running shoes have been built making three essential promises.

To a large degree, none of these premises have been established when compared to the published research on the topic, until very recently at least.

Points 1 and 2 above have been repeatedly tested by many researchers over many years, and the clear consensus is that the traditional concept of motion control strategies to prevent foot pronation, and cushioning to reduce the vGRF impact peaks and thereby reduce injury are not supported by the science. 33

Let’s take a deeper look at this.

Running-related injuries are common, especially among novice runners taking up a running regime.1

Foot pronation historically is believed to be a strong risk factor for injury, and a correct choice of footwear based on the runner’s foot type has been suggested as a major intervention to prevent such injuries.2

This strategy, which has been used over three decades, has affected runners’ choice of running shoes. A recent study found the majority of cross-country runners in that study identify foot posture compatibility with shoe design as the most important factor in choosing a running shoe.4

On the basis of their findings in a randomised controlled trial, persons running in motion control shoes sustained both a greater number of injuries and had a higher risk of missed training days than persons running in stability or neutral shoes.

In another study, no significant difference in injury risk was found between persons who were selected to receive motion control, stability or neutral shoes based on the foot’s plantar shape compared with persons who received a stability shoe regardless of plantar shape.6

This result was confirmed in two later studies.7 8

All this then prompted the following statements in a recent publication9:

Cushioning as an Injury Prevention Strategy

Likewise, although cushioning in running shoes has long been touted as important for injury prevention, the research tells a different story.

While it is difficult to draw a conclusion regarding the influence of vertical loading rate on running injury frequency, it is interesting to note that as the study participant sample size increased, the relative frequency of running injuries decreased.

In addition to the lack of epidemiological support for impact as an important determinant of running injury there is also a functional concern.

If higher impact peaks or loading rates were associated with running injuries one would expect runners who run faster have more impact-related injuries. However, this author has not found any study or even anecdotal evidence that supports this case.

Consequently, there is no supporting evidence that vertical impact peaks and/or vertical loading rates are variables that contribute to running injuries. 23 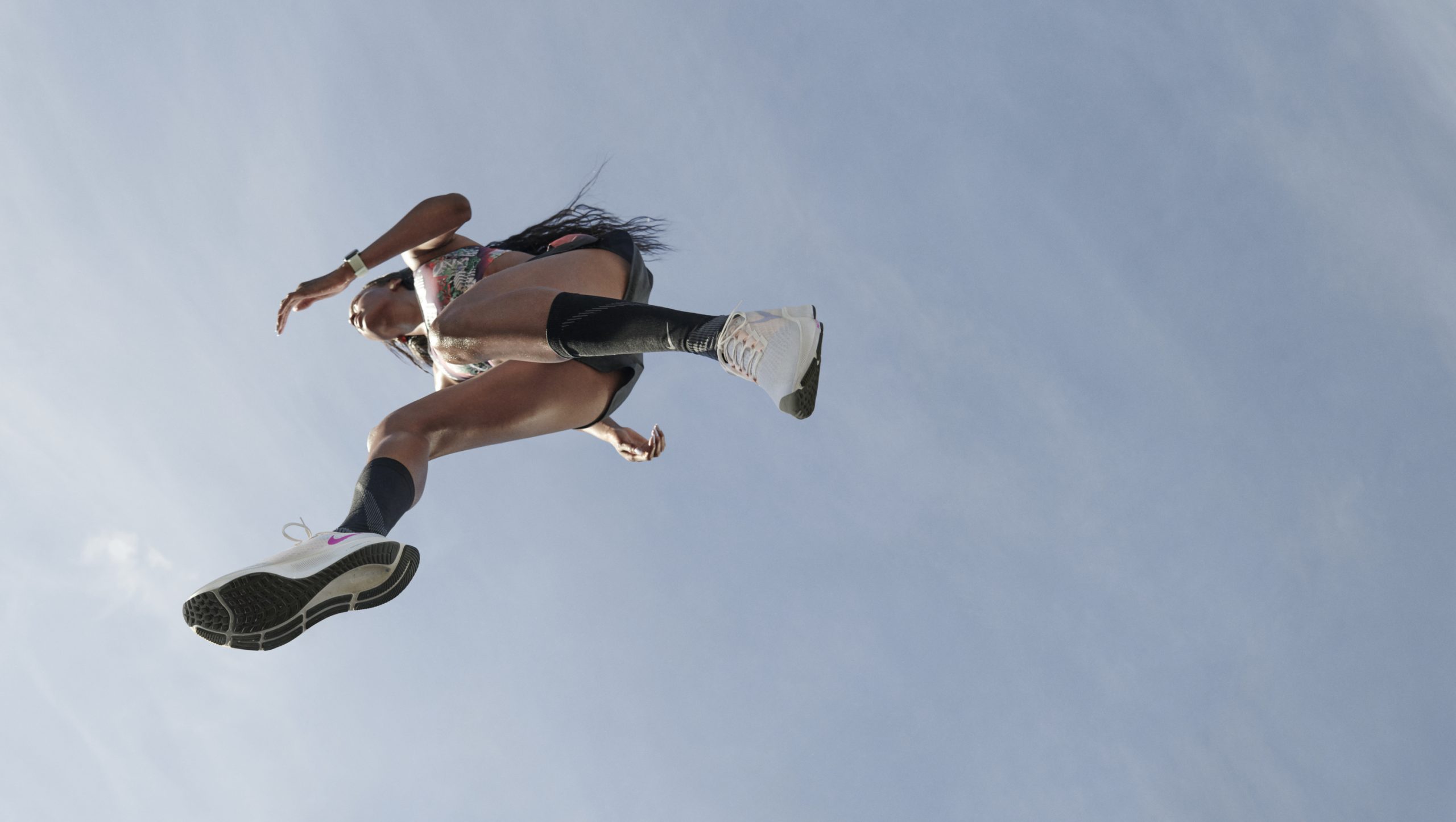 What we may therefore conclude from all of this, is that the 2 over-riding principles that have shaped running shoe design over the past 40 or so years are flawed and without scientific evidence! 33

Well we are certainly on much safer scientific ground here given the abundance of evidence that running shoes may affect performance on a number of different levels. Nowhere is this more evident than in what we witness with the extraordinary tumbling of world record times for the marathon distance, and the emergence of a new category of running shoe that has come to be known as the “super shoe”.

A landmark 2018 study 24 compared the energetic cost of running in 3 different types of marathon racing shoes, including one with a carbon fibre plate and specialised energy returning midsole foam. This study was able to demonstrate that of the 18 runners who participated, ALL derived an energetic benefit from the carbon plated shoe, and that this benefit averaged 4%. This is a very large energetic advantage indeed.24

Since this first publication, multiple multi-centre studies have corroborated these results 25-27.

OK, so armed with this knowledge, what should we be looking out for in high quality technical running footwear in the 20/21 range?

Well, as you can see, the rules have shifted substantially, and our focus on motion control and high cushioning for injury prevention have realigned to improving energy transfer, reducing fatigue and attenuating important impact loads, for example the peak braking force.

This all sounds pretty easy right? But in fact, it involves a quantum change in the way we think about running shoes. 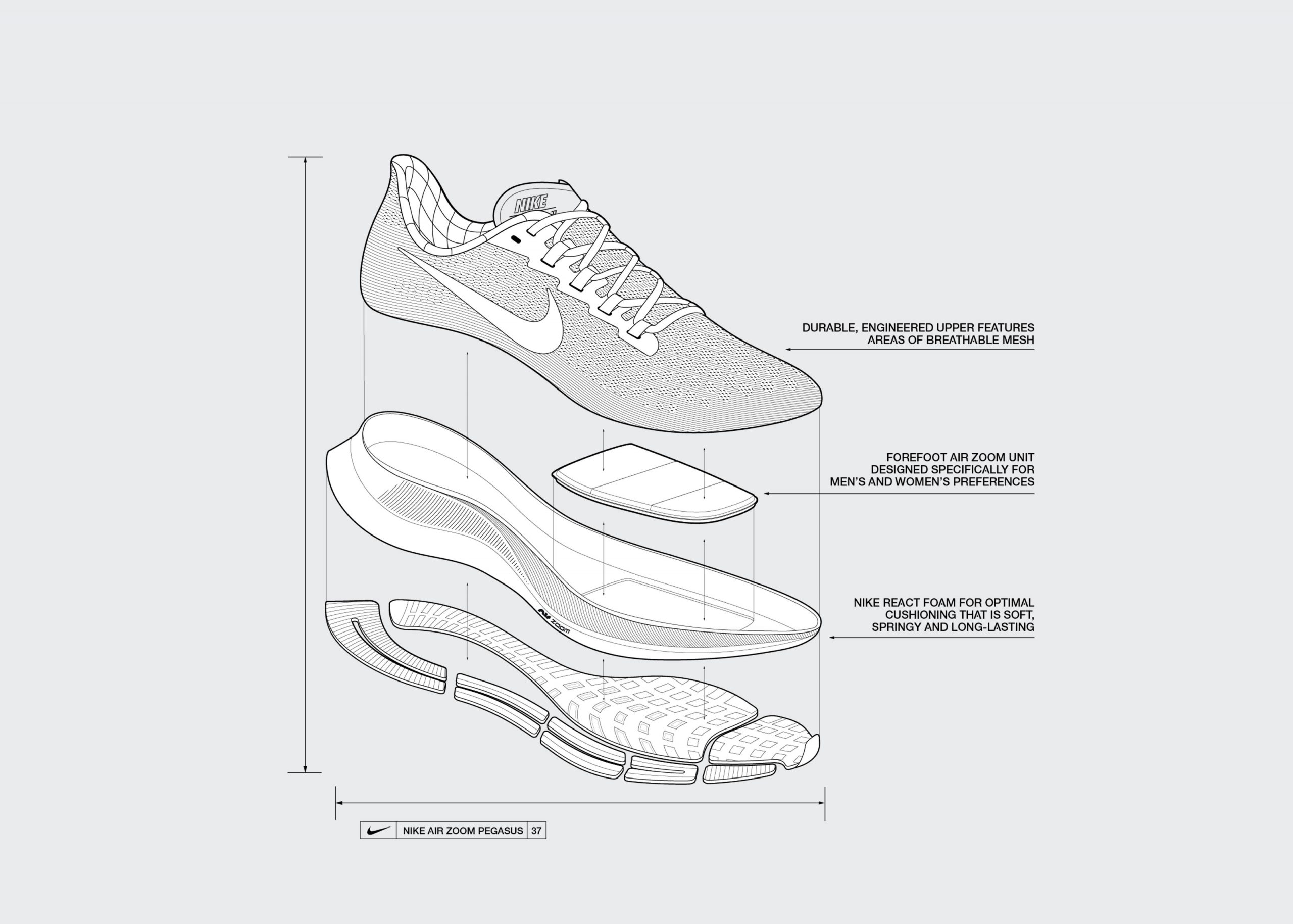 Improving energy transfer means trying to get the runner from the point of contact (wherever that may be) to propulsion, with the least energy expenditure and the greatest economy 28. If we can do that then the athlete requires less muscle activation, which in turn leads to less fatigue. Fatigue in a runner creates biomechanical and gait changes, and these may be a direct line to injury.  34 Improving energy transfer is far more relevant to a sagittal plane model than the outdated frontal plane “control” model, so beloved by motion control strategies. Put simply, there is no study the author is aware of to support this notion.

Likewise, utilizing design strategies to rethink “cushioning’ is important. Cushioning IS important, especially for comfort, which we know directly influences performance 29. However, in a classical sense, we have been unable to demonstrate a link between increased cushioning and injury reduction, or even a reduction in peak impact forces or loading rate.

Something has been missed because we have been looking the wrong way. While we were so focused on the vertical ground reaction force vGRF, which fits nicely with a cushioning model, we ignored a 2nd component of the GRF, the horizontal component.

The vGRF, also called Fz, simply looks at the vertical impact the foot makes with the ground, which, in fact is not vertical at all!

The horizontal component of the ground reaction force (Fy) is a result of the friction between foot and the ground, and so describes the peak braking forces at contact, and the peak acceleration forces in propulsion. Pretty important for runners I think we agree!

Foams are important for both Fz and Fy, and some of the new generation foams reconstituted from pelletised plastics have exceptional rebound and are very light. Systems that are incorporated into the midsole at the level of the forefoot, that have encapsulated filaments, can move in all directions, and so, for the first time, we have footwear that is specifically recognising the horizontal loads generated during the braking phase and the acceleration phase. Recent research has indicated that the peak braking force (PBF) is associated with a significantly higher injury hazard ratio in female recreational runners 30.

Previous studies have shown that reducing the PBF by gait retraining or footwear has been largely successful in reducing kinetic loads 31.

Another strategy that can be utilised to conserve energy and spread load is to look at the geometry of the midsole. Nowhere is this more evident than in the new flush of so-called super shoes, which all feature large amounts of high-tech foams, carbon fibre plates, and, highly technical midsole geometry designs, including substantial rockers.

A recent publication found that in part the rocker of a production road running shoe had an effect at the level of the 1st metatarsaophalangeal joint, by reducing the net energy loss without increasing the mechanical demand at the ankle as we would expect 32. This makes sense that a rocker might enhance the roll over process from contact to propulsion, thus improving running energetics.

The geometry discussion is not exclusive to the midsole, and much can be achieved by varying the width and depth of the decoupling grooves of the entire bottom unit, midsole and outsole. This geometric effect can have influence over sagittal plane transitioning from contact to propulsion, compression and cushioning at heel strike and power generation at toe off.

Geometry is also important part of the stability discussion, but not in the sense of ‘motion control”.

A stable platform from which the foot can function is still very important. But the historical notion that components would need to be included, for example dual density midsoles or hard TPU bridging between rearfoot and forefoot is not supported by the science and achieves little apart from adding weight to the shoe. One simple strategy to provide stability to the shoe is to simply increase the base of the shoe, making it wider. This helps keep the foot on the line of forward progression and therefore stability.

Read our follow up article which outlines how Nike are innovating modern running footwear concepts into their range.

We have partnered with Nike Australia Pty Ltd for this article series.

The views expressed in this article, unless otherwise cited, are exclusively those of the author, Simon Bartold of Bartold Clinical. Simon Bartold has over 35 years’ experience in the research, design and innovation space of athletic footwear. He is internationally regarded as an expert in sports footwear and injury.

Nike had no role in the collection, analysis, or interpretation of data or research or the writing of this article.

28 Nigg, B., et al, The effect of material characteristics of shoe soles on muscle activation and energy aspects during running. Journal of Biomechanics 36 (2003) 569–575

What has research taught us in the last 10 years

By injury..My top 5 questions and top 5 tests to use BEFORE prescribing orthoses.

In running, does it matter how much you move up and down?

Does cushioning prevent running injury? Closer to an answer?