Part ONE of the Top 5 Running Shoe Innovations Over The Past 20 Years series can be read here!

Continuing with my challenge from the evil Dr. Paul Griffin to name my top 5 innovations/innovators over the past 20 years, here is my number 2 (cue scene from Austin Powers).

Every women’s and men’s world record from 5 km to the marathon has been broken since the introduction of carbon fibre plate (CFP) shoes in 2016. This step-wise increase in performance coincides with recent advancements in shoe technology that increase the elastic properties of the shoe thereby reducing the energy cost of running. The latest CFP shoes are acknowledged to increase running economy by more than 4%, corresponding to a greater than 2% improvement in performance/run time.

Given that Nike was at least 3 years ahead of all its competitors in concepting, developing and then introducing the first of the so-called “super shoes”, the now-famous Nike Vaporfly 4%, it can be little surprise that I am naming this shoe as the second most important innovation in running shoes in the last 20 years. 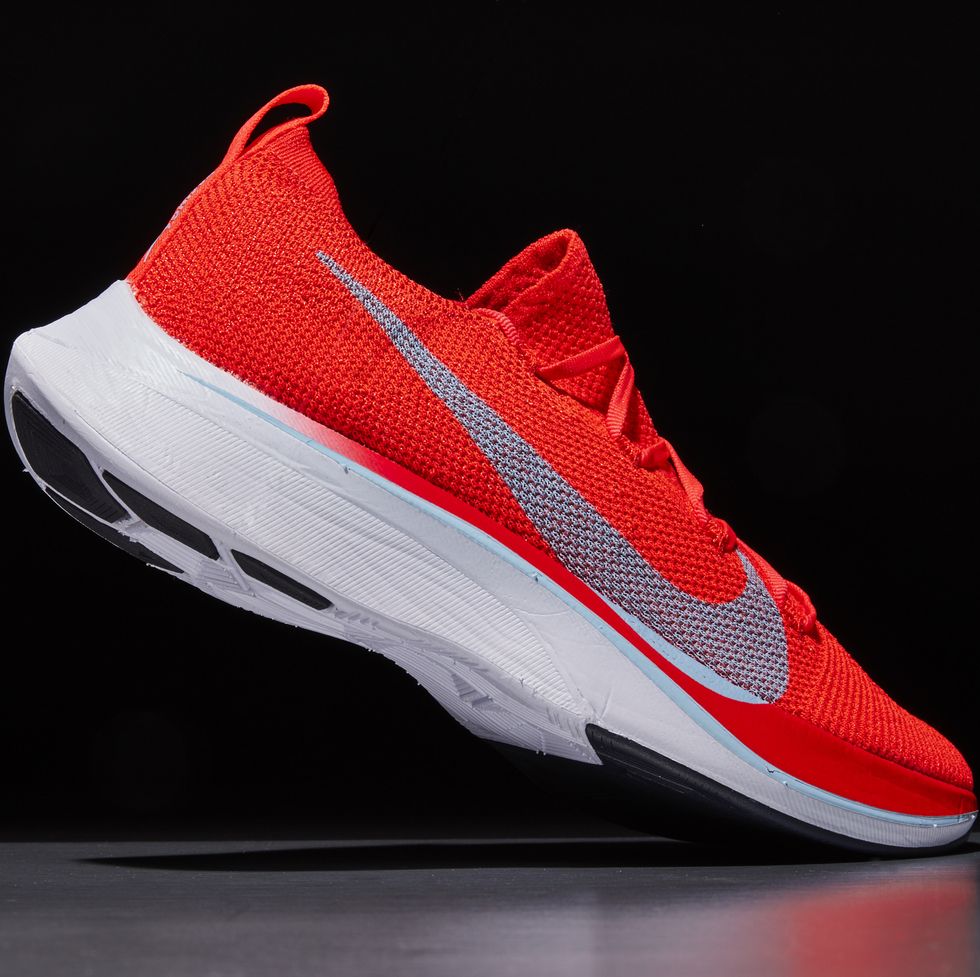 The Vaporfly 4% has spawned a family of shoes, and a new moniker.. “neolitic” Nike shoes, with the most recent, the Nike Zoom X Vaporfly Next %2.

These shoes are so dominant, they hold every world distance running record, for men AND women, from 5km up to marathon, with the exception of the Men’s half marathon World record, which is held by Kibbiwot Kandie. Wearing a pair of Adidas Adizero Adios Pro running shoes, Kandie stripped more than 30 seconds off the 1/2 marathon World record last December.

The numbers for Nike are unprecedented.. unheard of.. unbelievable, and not just for the records that have fallen, but for the manner in which they fell. Previously, over a period of almost 20 years, the Marathon World Record time has never been bested by more than 40 seconds.. here is the graph.. 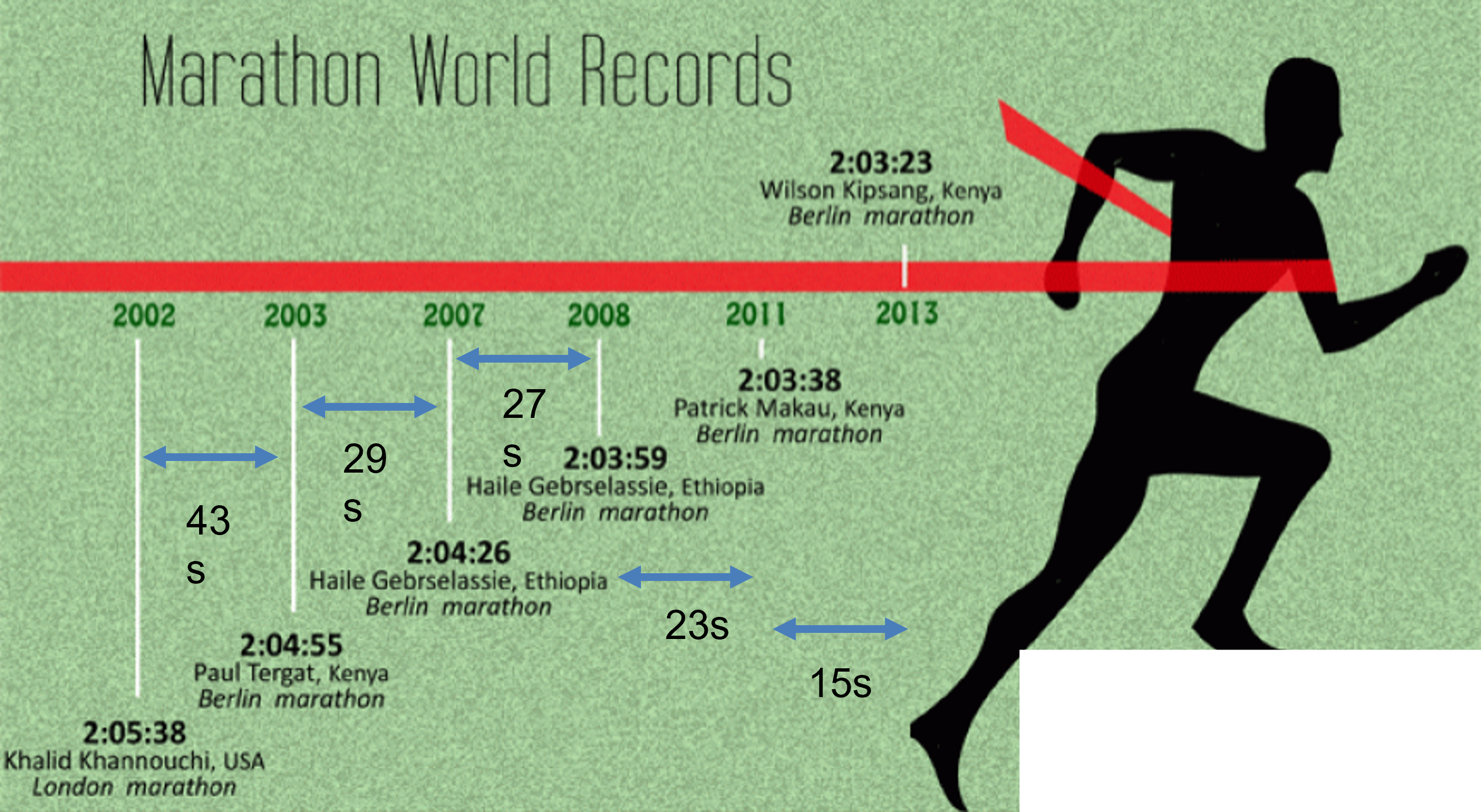 Then, in 2014, Dennis Kimetto took 34 seconds off Wilson Kipsang’s record, and this stood until 2018 when a bloke called Eliud Kipchoge rolled up to the Berlin Marathon in a pair of Nike Vaporfly 4% prototypes and proceeded to strip 77 seconds off the standing record.

I watched this happen live… Simply unbelievable and a rare privilege to see this moment in history!

SO much has been written about the Nike Vaporfly 4%, not all of it positive, and I do not intend to reproduce any of it here, save to say that in terms of pure performance innovation, this shoe is unique in the history of running footwear. The only shoe that may have come close is the Puma Brush Spike of 1968. Only 200 pairs were ever made and John Carlos and Lee Evans set World Records at the Mexico Olympic trials wearing them. 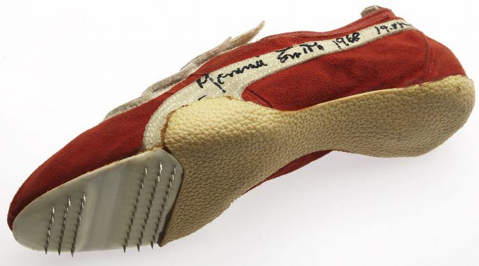 On September 28th, 1968, two weeks before the opening ceremonies, IAAF Secretary-Treasurer Donald Pain, banned the shoe and rescinded all records.

At this time, there was no Nike, and Adidas ruled supreme.

He makes some compelling arguments, not the least of which is..

” the victory, goes to the athlete whose physiology is optimized through training and genetics, then enabled by tactics, to cross the finish line first”

This is certainly true, but in the history of running and running footwear, the equipment, namely… the shoe, has NEVER been divorced from the performance. It always has been an important part of the result.

Tucker argues that the neoliticv Nike shoes  “separate the sport into haves and have nots”, but this simply is not the case. Anyone can access the shoes, and other brands, including Adidas, who just dominated the finishers at the NYC marathon (male AND female), Brooks, ASICS, Saucony, Hoka and NB to name but a few, ALL have supershoe technology.

Others have labelled the Vaporfly 4% a “cheat’s shoe” and “EPO for the feet”, all of which is an obvious nonsense.

I have worked in the industry for more than 30 years, and innovation and technology have ALWAYS played a role in ultimate performance.

Innovation and technology are something to be celebrated and embraced, and I can’t wait to see where it takes us in the future.

For this reason, the Nike Vaporfly 4% for me, is the 2nd most important running shoe innovation of the last 20 years!

New Balance enter the “Super Shoe” race with a cracker!

Nike knew Eliud Kipchoge would break the 2 hour marathon BEFORE he ran!

Maybe footwear comfort is not so important after all!