Does Nike Have A Secret Weapon With Its Zoom Air Bag?

Nike continues to dominate world running, now across distances other than just marathon. Is there a secret to their shoes?

For quite some time now, actually since Eliud Kipchoge went under 2 hours for the marathon distance of 42.2 kilometres during last year’s INEOS 1.59 project (you can refresh your memory on my thoughts on this achievement here), I have been wondering what exactly it is about the Nike Super Shoes that appears to offer a distinct advantage.

Since that moment in October, World records have not been broken, but smashed to pieces by athletes across a variety of distances wearing the new Nike product.

And so I thought it was time for me to put forward an idea, a hypothesis, of what I think is happening with the shoe, and then, in a later discussion, cross reference this with what Nike will tell me!

First, we need to talk some biomechanics and perhaps bust some myths right away.

For some reason, running is often viewed as a quite simple process from a biomechanical perspective, whereby the athlete places one foot in front of the other with a requirement for stability and protection from the impact of the ground in a vertical direction.

Nothing could be further from the truth, and running should be viewed as a series of highly complex, coordinated and interactive movement patterns, many of which we still do not fully understand.

Take, for example, vertical impact, which for as long as modern running footwear has been made, has been a strong focus of discussion and research. And, it makes sense doesn’t it because we are often told that the magnitude of the impact force when one strikes the ground during running is about 3.5 times a body weight, a very large load indeed, and one, it would seem logical, that the body needs to be protected from.

Well, there are a couple of issues.

First is that the load imparted by the foot striking the ground is not just about the impact force. There is also muscular action, particularly from the triceps surae (calf muscles), that will have a dramatic effect on other tissues, for example, bone.

And, when you add the vertical impact load to the action of muscles during running, the force accepted by structures like the tibia is not 3.5 time a body weight, but more like 14 times bodyweight… a MASSIVE input load!

This graphic explains the arithmetic: 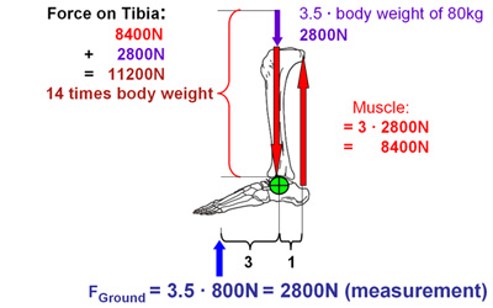 Well, we can’t measure a reduction in the real impact loading, and, we can’t see any reduction in injury rates over the past 40 years. And.. we have known this crucial bit of information since the venerable Professor Benno Nigg first started studying and publishing on this in 1977!

Stay with me, because I will circle back to the Nike Zoom Air bag in a moment, but we need to get this out of the way first.

Most people assume that vertical impact, what is known as Fz, is the only important aspect of hitting the ground. But when you hit the ground, generating what we call the ground reaction force, or GRF, there are 3 vectors making up the whole, and the vertical component is only one.

There is also Fy, which is the longitudinal or horizontal GRF, which typically accounts for braking force and acceleration force, and Fx, which is side to side GRF.

Both Fy and Fx have been completely overshadowed by Fz, because it is assumed that the vertical force is the killer.

But, runners do not strike the ground vertically, and so it is super important to recognise Fx, and, especially Fy and its role in generating potentially very high peak braking moments and peak acceleration moments. 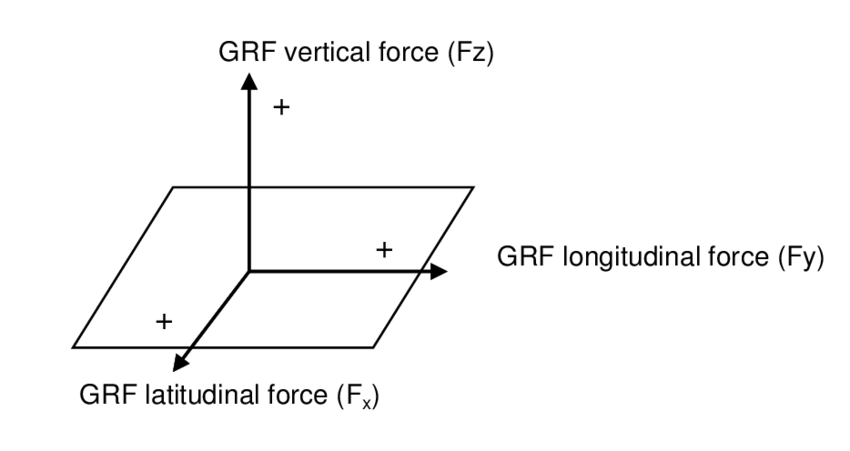 Ok… Hopefully we are clear to date, but, what I am trying to explain is that in our haste to blame the vertical impact load Fz for injury and the ability to cushion, we have to a large degree ignored the two other reaction oriented forces, horizontal and side to side. And these may have just as much influence over the runner, their performance, their fatigue and their likelihood of injury, as the vertical load.

Take a look at this video.

The dotted line is Fz.. vertical impact, and the solid line is horizontal, Fy. Within Fy, below the line is braking and above the line is acceleration. You will clearly see that as the vertical impact load rapidly increases to its peak, the horizontal load decreases rapidly, indicating rapid braking of the foot as friction cuts in and slows the foot. The peak of this braking force roughly equals the positive peak of the vertical force.

OK, enough of the boring nerdy stuff, what has this got to do with the new Nike shoes, specifically the AlphaFly and the brand new Air Zoom Tempo Next %?

Both shoes have the forefoot Zoom Air bags.

This is for protection and cushioning from those evil vertical loading forces, right?

Hmmm.. well I don’t think so… I think the composition of the Air bags is incredibly important because those little strands inside the bag are NOT just for decoration.

Now, what do you see?

The compression of the Zoom Air bag here is NOT vertical (thereby representing attenuation of vertical GRF), but.. horizontal.. wow!

So, I shall now go out on a limb and say that I think these Nike shoes do offer the fast athlete a performance and energetic advantage (which is already established in the research), but, it does not achieve this by cushioning and “energy return” per se.

The airbag is clearly able to move in all three reaction oriented force directions, but the most important is probably in the horizontal direction (Fy) for a number of reasons.

Nike has an extraordinary research capability, with hugely talented biomechanists, engineers, designers and developers, so, I am quite sure none of this is accidental.

Of course it is not the Zoom Air bag in isolation that achieves the effect. The beauty of these shoes is the sum of all parts to create the whole.

This is my hypothesis, now let’s see if we can get some more info from Nike!

Meantime, here is a little Nike commentary from their Insta feed!

Go behind the design of the Nike Air Zoom Tempo NEXT%, a shoe with the same record-breaking DNA as our fastest racing shoes. Because fast racing begins with fast training. Available now at link in bio.

If you would like to learn more about Athletic footwear, consider buying our ebook at a 40% discount THIS WEEK ONLY – follow this link to buy Athletic Footwear; The Comprehensive Guide

2 responses to “Does Nike Have A Secret Weapon With Its Zoom Air Bag?”

Other Causes of Sesamoid Pain

How to tape for Achilles tendon pain

Fatigue: What are the biomechanical consequences, and what do they mean?

What does body mass do to the plantar fascia?